My first time in Antarctica

Preparations before expeditions are always exciting. No matter if it’s a private trip to some destinations in the European Alps or it’s scientific expedition to one of the remotest areas of the world - Antarctica.

Just more time of preparation and equipment is required in the second case. Four month after the cargo left the harbor of Bremerhaven, Germany, I was ready to start my journey southwards. Bremen – Paris – Santiago de Chile – Punta Arenas flown by and I found myself leaving a Hercules military plane on the airfield of the Chilean Station Frei on King George Island. Just a small step – a two hour zodiac ride – separated me from Jubany Station - the final destination and center of my life for the next 3 month.

At the German Dallmann Lab scientists from different countries – mainly Germans and Argentineans – are living and working together on limited space during the Australian summer. During the first days it was a little bit difficult to get used to the unwritten rules and to find one’s place in the existing group. But already after a few days I established my new daily routine, mainly driven by lab or field work and of course by the meal times. The latter offered a nice possibility of socialization with friends and colleagues, besides small chats during lab work.

Like all other projects I relied on working and sampling in the field and received great support by the Argentinean divers. During the sampling trips out to the cove I found time to enjoy the impressive panorama on the Antarctic landscape and glaciers in a cold but silent and intense environment. Additionally most trips were accompanied by nice weather, due to the requirements of low swell at Potter Cove.

At the beginning of February field work was restricted by strong blizzards for nearly two weeks.

Luckily I was able to fill this time with lab experiments and aquarium work. Anyway, it was also a great feeling to tramp through the snow in the storm to the lab containers and being reminded of the force of nature and the limit of technics. According to the second I received a sustained reminder. Weakened by strong cold and winds over weeks one of my teeth broke out and finished the time of smiling pictures abruptly. Fortunately it was already an artificial tooth.

At the end of March two colleagues and I were picked up by the British vessel ‘RRS Ernest Shackleton’. On a 14-day sail back to the Malvinas I was very lucky to visit some unique and historical places like South Orkney Islands or Grytviken on South Georgia. After a long flight over Ascension Island and England I was welcomed by my dentist on a warm spring day in Vienna. 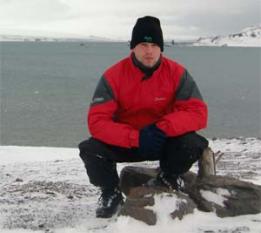